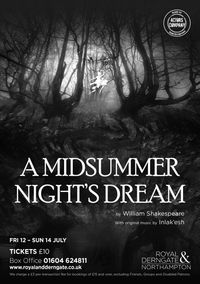 (The Tragedy Of) A Midsummer Night’s Dream

When a young woman’s choice is to marry a man of her father’s choosing or die, should she refuse? A series of mishaps and misunderstandings unfold when she takes matters into her own hands and escapes through an enchanted forest with her lover.

Is this a comedy with fools, fairies and flowers? Or is this a tragedy of manipulation, disorder and dark creatures? Throw in a chaotic battle between the Fairy King and Fairy Queen with some unusual capers between amateur actors and we ask the question: who is really in control of this midsummer night?

Directed by Erica Martin with design by Ross White and original music from Inlak’esh, Royal & Derngate’s The Actors Company explore a dark and quirky side to William Shakespeare’s most popular play.